The Ffrench's arrived with the Anglo-Normans and moved west in the 16th century. 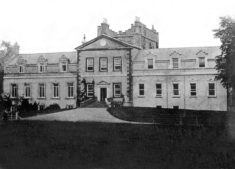 Monivea Castle dates back to the 16th Century when the Ffrench Family, who had arrived in Ireland with the Anglo-Norman invader, Strongbow, moved west and purchased the castle and estate from the O’Kelly clan. The village, as we know it today, was then developed and grew when many generations of the Ffrench family, together with workers hired from local villages, reclaimed land from local bog lands and developed local industry. In 1650 Oliver Cromwell terrorised Ireland and confiscated the lands. However, following Cromwell’s departure, the family purchased the lands again, including lands in the townland of Corrandoo.

In 1744, a descendant, Robert Ffrench, inherited the estate and made many improvements such as drainage, seeding and reclaiming lands from the bog. He set up a linen industry and the green in Monivea village was used for bleaching and drying the flax. He also built a charter school, now McGivern’s, and nurtured beech plantations throughout the estate. Robert Ffrench represented Galway in the English Parliament between 1768 and 1776. In its prime in 1876 the estate occupied 10,121 acres of land and by the late 19th Century another generation of the family reigned and another Robert Ffrench was now at Monivea Castle.

He was a member of the British diplomatic service and served as Secretary to the British Embassy in St. Petersburg and Vienna. He travelled widely and led the life of a rich Diplomat. He married Sophia, only child of Alexander de Kindiakoff, a Russian noble of great wealth with seven estates on the Volga River and they had one child – Kathleen Ffrench. Robert died in Italy in 1896 and Kathleen decided to build a Mausoleum in Monivea where he would be laid to rest. While the Mausoleum is immaculately preserved and maintained but the central tower of the main house and some of stables survive. In fact this was the original castle around which was built a more modern house. 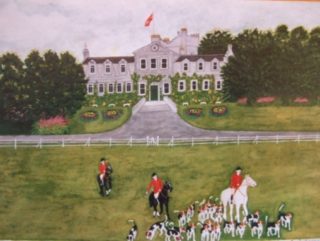 A painting by Wini Hardiman (formerly Coppinger of Corrandoo) shows the Castle in its glory days. Almost every family in the surrounding area would have had a family member employed – servants, housekeepers, maids, butlers, water carriers, stable workers, orchard and garden keepers, game keepers, cooks, laundry workers, carriage drivers etc. Men tipped their hats as the “Gentry” rode by in the carriages. The family kept many horses and were keen huntsmen and women.

Kathleen Ffrench’s Will read: “I give devise and bequeath to the Irish Nation the demesne of Monivea with the Castle including Kilbeg and Currendoo, the bogs, reclaimed lands and plantations, on condition that no parcel of these remains of my former estate shall ever be sold or the trees cut down unless they fall to pieces”.

Robert Ffrench died in Italy in 1896. His body was embalmed in Milan until the Mausoleum was completed in 1900 at a cost of £10,000. His beloved daughter Kathleen arrived in Monivea to oversee the building works – a project which employed many local people. Designed by Francis Persse, younger brother of Augusta Gregory, the Mausoleum is a small castle built of Wicklow granite. The front bears the coat of arms and the motto of the Ffrench family “Malo Mori Quam Foedare” which translates as “Death before Dishonour”. The door opens in to a chapel with a marble floor. The mausoleum is reputed to contain seven types of marble, including Connemara marble. The chapel is lit by five beautiful stained glass windows made by a German company, Mayer of Munich. The window above the altar depicts Our Lord with two Angels. The side windows show the coats of arms of the Ffrench family and other relatives of the Ffrench’s. In the centre of the chapel floor before the altar is a beautiful sculpture of Robert Ffrench lying in state in his robes of the Order of Malta. It was carved by Francesco Jerace, a renowned Italian sculptor, in white Carrara marble, shipped to Ireland and brought to Monivea by horse and cart. A black marble column stands at each corner of the sculpture which supports the ceiling. Two lead coffins rest in the crypt of the mausoleum, reached by the winding stone staircase to the left of the altar. You may also climb upstairs from where there is a lovely view of the surrounding woodlands. Mass is said once a year in the Mausoleum.

Kathleen (1864 -1938) often visited Monivea from her travels abroad and once wrote that she loved Monivea so much that she “could quite easily settle here”. While Kathleen spent much of her life away, her cousin Rosamund stayed in the house and remained there until she died. A rift developed between the women in later years. Rosamund may have thought that Kathleen ignored Monivea and stopped financing the house and was leading the high life abroad. Communications at that time were difficult and letters took a long time to arrive. Following her father’s burial at Monivea, Kathleen returned to her vast Russian estates. After the Bolshevik revolution in 1917, all her lands were confiscated. Having lost all her Russian wealth she was imprisoned and released in 1919. She fled Russia via Finland. She settled in Harbin, Manchuria, China. She then crossed Outer Mongolia, the first non-Russian European woman to reach the new Republic of Tannu Tuva and on to Peking, completing a round trip of over five thousand miles. She died in Harbin 1st January 1938. Her body was brought back to Monivea, a distance of four thousand miles. Kathleen left nothing in her Will to her cousin Rosamund but Rosamund inherited the estate following a legal problem – but had died 2 days previously so she never knew. As neither had an heir the Estate passed to Rosamund’s friend Cicily Godwin Austen and her chauffeur Henry Stainer, By the 1940’s most of the estate was disposed of by the Land Commission. Kathleen Ffrench willed that the house be used as a home for “indigent artists”. The terms of the Will were never honoured and the house was knocked down.

The Book “An Irish Woman in Czarist Russia” by Jean Lombard gives a fascinating account of this remarkable and strong woman. The research began when bundles of letters were found in an attic by a relative of the Blake family (also of Monivea/Ryehill).  They were written in Russian, English and French. A posting to Russia by the author Jean and her husband John helped to research the history of Kathleen Ffrench. The book was published and launched in 2010

Rosamund Ffrench died in 1938 was the last resident of Monivea Castle. She was laid to rest outside the Mausoleum.