Named after the Napoleonic campaigns at Waterloo under the Duke of Wellington. 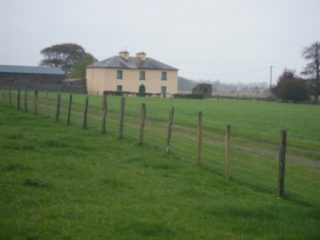 Waterloo House is located in the townland of Aghanahil in the civil parish of Killoscobe. Originally called Ogheloghell the area was ruled by Catling O’Manning in 1641. By 1670, after the Cromwellian conquest, it was controlled by Matthew Ffrench. The Gaelic for Aghnahil is Achadh Leamhchoille which translates as ‘the field of the elm wood’.

Lands at Carrownacregg were granted to Sisby O’Concannon by patent dated 21 Mar 1678 and this became the main O’Concannon family residence but was replaced by Waterloo in the early 19th century. In 1824 Edmund Concannon, of Waterloo Lodge, is recorded as a resident proprietor in county Galway. He married Jane, daughter of John Blake of Belmont and his wife Sarah Cuff, sister of Baron Tyrawley. Blake Foster records that they had six sons, the eldest, Henry, was a barrister and married Countess Maria Aurora Arabella de Luicia. The third son, Edmond, married Kate Parsons and they had a son, Edmond John. James Blake Concannon of Esker was the fourth son. Over 3000 acres owned by Edmond John Concannon and Edward Thomas Beytagh, were offered for sale in the Encumbered Estates Court in 1851. Today this Concannon line name continues to be associated with the legal profession in Tuam.[1]

At the time of Griffith’s Valuation the Concannons held land in the parish of Killoscobe, barony of Tiaquin, some of which was leased from Walter Joyce of Corgary and also in the parish of Grange, barony of Loughrea. Henry Concannon sold Carrownacregg West, including a mansion ‘out of repair’, to James Browne in 1851. Three persons named Concannon with addresses at Tuam, Dunmore and Castleblakeney, owned small acreages in County Galway in the 1870s.

The origin of the name Waterloo is derived from the Napoleonic campaigns at Waterloo, now in present day Belgium, and in which many members of Irish families fought for the Seventh Coalition under the command of the Irish-born Duke of Wellington. He would later, for two terms, become British Prime Minister.

The current occupiers of Waterloo House- the Killeen family – are recorded as being ‘sheep herds’ in the late 1800s. It is also noted that Blue Bangor slates from the outhouses were used in many of the local dwelling houses during the 20th century.