Former residence of the Carr family of linen business fame. It was built in 1800. 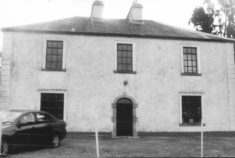 Lakeview House is situated in the townland of Carrownabo, in Moylough civil parish and Tiaquin barony. The Carr family built the house in 1800, which was to be their home until their estate was taken over by the Land Commission in the early 1920s. An offer from the Congested Districts Board was accepted on over 170 acres of the Carr estate in 1914. Lakeview is a title given to a broad area that includes all or part of townlands such as Carrownabo, Ballingatta, Carrowkeel, Gortaganny, Patch and Mullaghmore East. The name Lakeview comes from the nearby lake Loch Nalarsagh or Loch na Lascadh as it was originally known. The lake is situated in a marshy area that contains phosphorous and methane gas and local legend holds that it goes on fire every seven years.

The Carr Family of Lakeview

The Carrs were originally involved in linen weaving. By the 19th century, following a worldwide decline in the linen business, they diversified to being large stock farmers, and initially held these lands from the Bellews of Mountbellew. Carrs linen was in huge demand and was sold throughout the country and was used in all of the local churches. The industry created huge employment at its prime for local inhabitants. Michael Carr inherited the estate in 1820 and he married Mary Kilgannon. They had twelve children one of whom, Thomas Joseph, became Bishop of Galway in 1883 and in 1887 he became Archbishop of Melbourne, Australia. Another son, John Michael, married Sabina O’Connor of Pallas and they had two children and the youngest, Michael, was the last Carr resident of Lakeview.

The house was occupied by Michael Carr at the time of Griffith’s Valuation, c.1854, when the house was valued at £13. A house is shown though not labelled on the 1st edition Ordnance Survey Map, 1838, but it is named as Lakeview House on the 25-inch edition of the 1890s. Lakeview is still extant and is the current residence of the Doyle family.