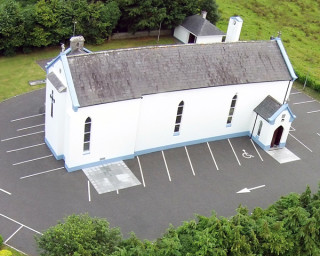 Skehana Church from On High !
© Gerry Costello Photography
My location
Get Directions

Skehanagh (Irish: Sceachana) is a small village in County Galway, Ireland. The name Skehana derives from the Irish Sceith eánach meaning “place of the whitethorn”. It is a half parish which is contained within the diocesan parish of Killascobe. It was noted in the literary world in the late 1980s and early 1990s for an annual Arts Festival which was held there. A hurling club exists and has enjoyed many successes in recent years. The ruins of an Anglo-Norman tower house, Garbally Castle, exist immediately West of the local national school. The area is noted for its passionate hurling teams with the cry “Up Skehana” enjoying local and national recognition.