You are here: Home>Publications>Culture Night 2022

Once again we are delighted to participate in Culture 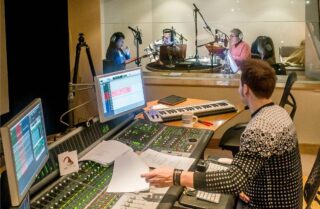 Night 2022, on September 23rd 2022. This is our sixth consecutive year to participate and once again we are engaging in a novel approach to our production by introducing an adaptation of a stage drama for a radio broadcast.

This drama, Macushla,  was written as a stage drama by noted Irish historian and writer, Fergus Campbell, to support the Decade of Centenaries project. It is set during the War of Independence, in the classroom of a rural school in county Galway on Sunday 10 July 1921, the day that the Irish Republican Army signed a truce with the British to conclude the War of Independence (1919-21).

It’s characters are Cathy Prendergast (a member of Cumann na mBan, in her twenties, played by Mary Naughton), Danny Parsons (a Black and Tan in his twenties, played by Gerard Lally), and Edward Raftery, (a member of the Irish Republican Army in his twenties – played by Brendan Dolan). The adapted drama is produced and directed by Ann Craughwell while the recording was conducted at Gerry Costello’s Studios in Skehana. While Mary, Ann, Brendan and Gerard have a wealth of experience of live stage performances in a variety of roles and Gerry has a lifetime of experience of photography, video production and more recently as a radio presenter, this is a first for all five in which to engage.

We acknowledge the generous moral and financial support and encouragement that we have always receive from the Arts Office at Galway County Council. This year our main contacts are Claire Connolly,  Amie Lawless, Tracey Ferguson and Sharon O’Grady, and we are especially grateful to that team for leading us in our efforts.

Listen to the production on the this link: Mucushla Drama – Culture Night 2022

The setting is as follows:

There is a table, a chair and a blackboard stage left. This is clearly where the teacher usually sits. In front of the table – stage right – there are a couple of rows of wooden chairs facing the teacher’s chair. There are big windows along the back wall. There is a door into the kitchen upstage, stage left, and this also leads to the teacher’s living quarters and bedrooms. The main entrance to the school is through a door that is downstage, stage left. There is a door into a store-room for books and chalk and so on, upstage, stage right. Another small room is entered by a door that is downstage, stage right and it is here that turf is kept for the kitchen and the fire. On a side table, there is a record player, a notebook, a fountain pen and ink, a newspaper, a jug of water and some glasses. The set might be a wooden frame that suggests a room.

EDWARD, who is wearing the Irish Volunteer uniform, walks out of the room where the turf is kept and dusts himself down and closes the door carefully behind him. There are bandages on the fingers of his left hand. He takes a bottle and a hypodermic needle from his pocket and injects himself with it. Then he sits down and lies his head back.

After a beat, there is the sound of someone kicking the front door. EDWARD looks around. It takes him some time to realize what is going on. There is another loud kick on the front door.

EDWARD realizes that something might be wrong and stands up and takes out his gun. The door is kicked open and DANNY steps in to the classroom in civilian clothes. CATHY enters behind him wearing the Cumann na mBan uniform and holding a gun. There is a bandage on DANNY’s head.