You are here: Home>Publications>The Curates and The Parish Priests of Killoscobe - A Review

The Curates and The Parish Priests of Killoscobe - A Review 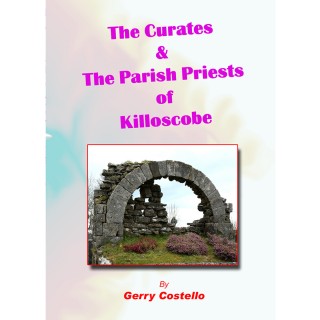 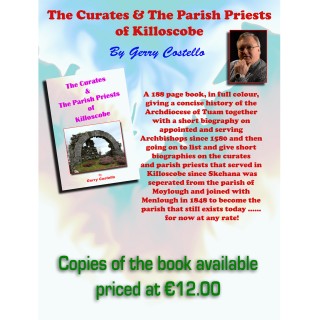 This book is a 188 page publication in full colour giving a concise history of the Archdiocese of Tuam together with a short biography of each of the appointed Archbishops who ministered there since 1580. It then goes on to the local parish of Killoscobe and lists the curates and the parish priests who served the parish since Skehana was seperated from the parish of Moylough in 1848 and joined with Menlough to become the parish of Killoscobe that we know today. Where possible, a biography on each of the priests is also included.

A review written by Bun ós Cionn in December 2015

The Writer, The Republican and the Beekeeper:

In his history of the archdiocese of Tuam, written around the year 1670, the Galway historian John Lynch explained that from long before his own time the diocese of Tuam was understood to have extended from the Aran Islands in the west, to Aghyart in the east.  Aghyart was the name in Lynch’s era for a territory that roughly corresponds to the present parish of Moylough, one of the oldest church sites of which is Killoscobe.  This makes The Curates and the Parish Priests of Killoscobe by Gerry Costello a very important contribution to the history of Galway.  Given likely changes in the foreseeable future to church structures, like parish clustering, it also makes his book a very timely one.  A founding member of the Skehana and District Heritage Society and one of three generations of Costello local sacristans, Gerry is ideally placed to recount the story of Killoscobe.

If there is an oversight in the book, it is in the opening chapters, where he recounts the history of the archbishops of Tuam.  Here, he appears to have relied more than was necessary on entries from Wikipedia, which given its ‘crowd-generated’ information produces entries that vary from the detailed to the very poor.  The author could have done worse than consult the works of Dr. Tony Claffey or Fr. Kieran Waldron, who have done so much to fill gaps in the historical record locally.  The result is that, while some of the bishop’s lives are well-covered, there are oversights that would be of interest locally: John de Burgo, archbishop during the 1640’s Confederation, was educated not by the bards but by the Protestant Isaac Lally of Tullinadaly; both De Burgo and Michael Skerritt are buried in Tuam’s Temple Jarlath; the two O’Gara archbishops (1723-48) were almost certainly brothers; John Healy was a native not of Roscommon but of Ballinfad, Co. Sligo.

Where Costello’s book merits high praise is where he outlines in detail the lives of the priests who ministered in Killascobe, especially in Skehana from 1861 onwards.  He clearly left no stone unturned to discover as much as possible about these men.  Both the mobile nature of the secular priesthood and its celibacy means that there is truth to the old saying that “nothing is quicker forgotten than a dead priest.”  Costello’s findings are very impressive.  Not only did he seek out and photograph their graves, but he clearly trawled through copious newspaper archives in search of any public notices to the priests or their families.  Being educated in a time of great poverty and limited literacy meant that (for better and worse) clergy were, whether they desired it or not, drawn into much wider issues in Irish society than would normally be the case in other Catholic cultures.  Although this earned them considerable kudos, it was no walk in the park.  Following ordination most were sent directly to remoter regions and the islands.  A surprising number, while still young, spent time evangelizing western Africa.  In Gerry Costello’s hands the subjects of his book are presented as thoroughly human.  For a small parish it produced its share of priest ‘characters’; from writers, republicans and a beekeeper to polemicists who defended their flock from the ‘bible readers’ of the Second Reformation.

Gerry Costello, The curates and parish priests of Killoscobe (Galway, 2015)